Most bioassays used at Het Waterlaboratorium are CALUX® (Chemically Activated LUciferase eXpression)-assays. These assays provide detection of sensitive and specific biological effects at the cellular level.

CALUX® assays are a family of bioassays using human or mammalian cells. They are genetically modified to produce light when exposed to substances that induce a specific effect. A reporter gene (luciferase) is consequently transcribed in the nucleus of the cell, and translated into an enzyme that produces light upon administration of its substrate luciferin. The amount of light produced is proportional to the activity of the substances to which the cells are exposed, and is quantified in a luminometer. The principle of the CALUX assays is schematically depicted in the figure below. 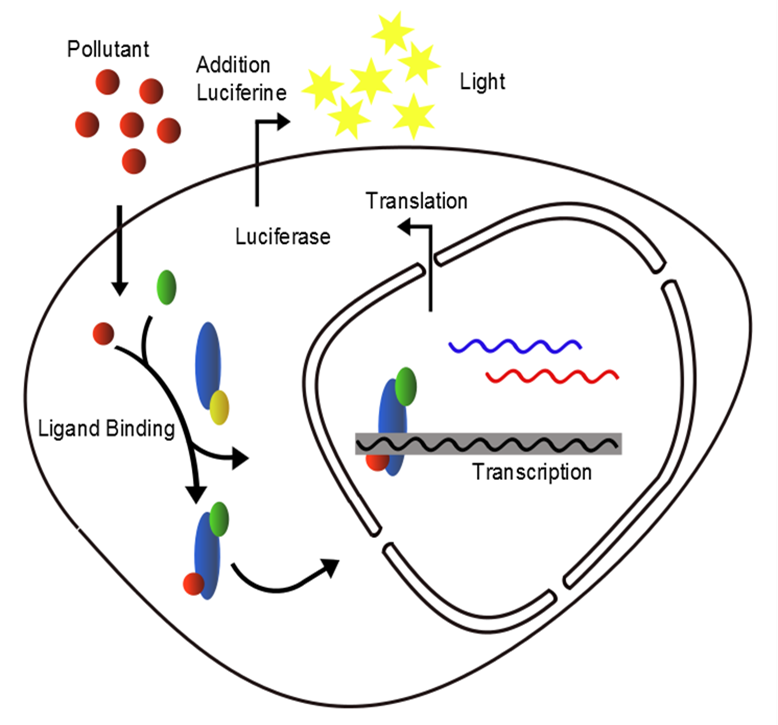 CALUX cells are cultivated in the laboratory. To test water samples, cells are plated in microtiter well plates (96 or 384 wells). The cells are exposed for 24 hours to various dilutions of chemicals or water extracts which have to be tested. In each experiment, a concentration series of a reference substance is included. After exposure (usually 24 or 6 hours, depending on the type of CALUX assay), the amount of light produced is measured quantitatively. The activity of the chemical or water extract can then be expressed in equivalents of the reference substance.

Below you will find links to scientific publications in which Het Waterlaboratorium investigated the water quality using CALUX bioassays.