A closer look at definitions

An unknown word? You will find explanations in our knowledge base!

Next-Generation Sequencing
View our knowledge base

Matrix Assisted Laser Desorption/Ionisation Time-of-Flight (MALDI-TOF) is a mass spectrometric technique that determines within minutes the identity of a bacterial colony (microorganisms) based on protein patterns. This technique which was investigated for the first time by Het Waterlaboratorium for drinking water research, and is now being used by all Dutch drinking water laboratories as a fast and legally accepted confirmation technique. The analysis time for various microorganisms such as E.coli bacteria, enterococci, Clostridium perfringens, Legionella spp. and L. pneumophila is now reduced to 1-3 days.

Quick analyses results into faster preventive measures by drinking water companies and better protection of the public health, for example in the case of a faecal contamination. Het Waterlaboratorium uses an unique approach because MALDI-TOF can operates as a confirmation technique in routine analysis but also can applied successfully for research purposes. Examples are the source tracing of faecal contamination in extracted water, and the inventories of Aeromoas and coliforms species in the distribution networks of our clients. For more knowledge, see the Knowledge Base

By using Reverse Transcription Polymerase Chain Reaction (RT-PCR) it is possible to detect E.coli in drinking water in approximately four hours instead of 24 hours, which is achieved with a standard cultivation method.

The RT-PCR method is based on detecting RNA in drinking water samplers and can be achieved within four hours. This is considerably faster than with the conventional cultivation methods. If calamities occur, such as a pipe break or a pipe reparation, this short analysis time results in quick insight into the reliability of the drinking water. As a consequence, potential health risks are limited for consumers and pipelines can quickly operate again, with a limited production loss. Since 2018, this E.coli RT-PCR method has been legally accepted and since then is operational at Het Waterlaboratorium.

Currently, Het Waterlaboratorium is working on a RT-PCR method for the detection of Enterococci. For more information, see Projects. 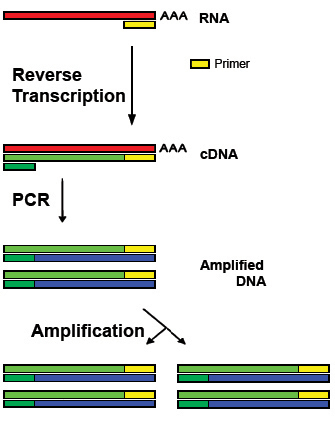